The CRCC’s Criminal Justice Reform Group, one of the subgroups of the Racial Justice Team, has been reading, listening, and discussing issues in criminal justice reform and wanted to share some thoughts regarding the elections with the broader CRCC community.

While the election season usually focuses on the races for Governor, County Executive and County Council, one important role that is often overlooked is that of the State’s Attorney (District Attorney in some states). The State’s Attorney’s office in each county in Maryland is responsible for the following:

The office of State’s Attorney is an important focus for criminal justice reform, since that office is the gatekeeper – deciding who is detained for trial, and who is dismissed. Inequity in the criminal justice system is the result of both unconscious and conscious bias. The following chart shows the disparities in sentencing based on race, even when drug use and arrests for drug possession track close to the percentages in the general population: 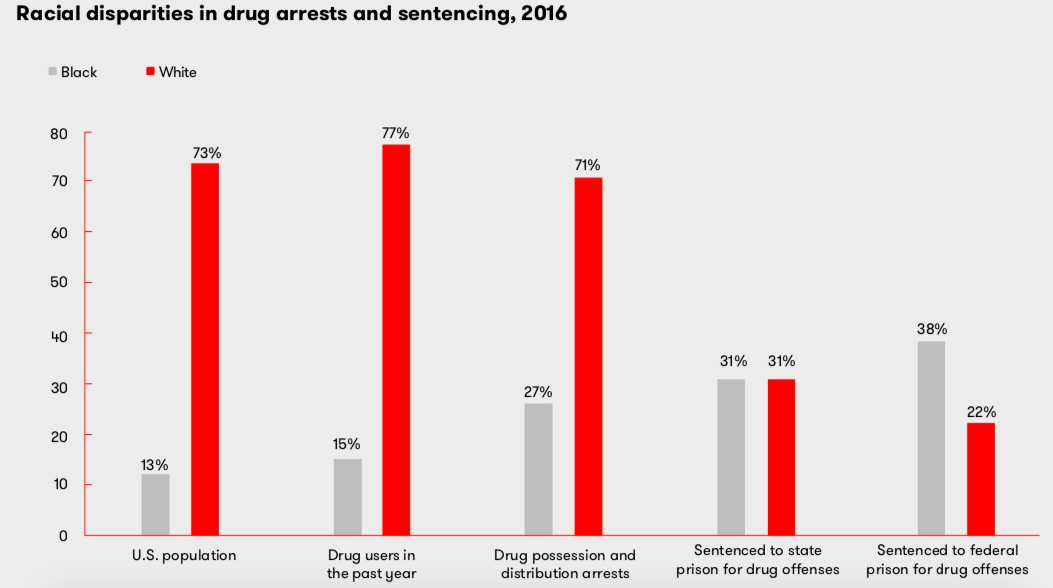 “Studies show that Black men regularly receive longer jail sentences than white men for the same crimes. Statistics also indicate that while Black people and white people use illegal drugs at similar rates, Black people are imprisoned for drug crimes almost six times more often. The examples go on and on. Systemic racism is alive and well in the criminal justice system, and it’s one of the big reasons why the US has only 5% of the world’s population, but 25% of the world’s prison population. And it’s why people of color make up 60% of our prison population but only 30% of our overall population.”

Sources: 5 Reasons You Should Care About Your Local Prosecutor Race, Equal Justice Initiative

If you are interested in further reading, some additional links are provided at the end of this page.

Question 4 on the Maryland ballot this year Amends the Maryland Constitution to legalize adult-use recreational marijuana and directs the legislature to pass law for the use, distribution, regulation, and taxation of marijuana. This issue relates to the racial disparity and discrimination that has always been associated with the “war on drugs.” You can read a statement put out by the White House on this issue here. For more detailed, nonpartisan information on Maryland Question 4, click here.

A) Register to vote.

If you are not already registered, or if you want to register for a mail in ballot, visit these sites.

Get to know the State’s Attorney candidates in your county–as well as other officials standing for office. You can find out who and what is on your county’s ballot by visiting this site.

Note: If you are interested in the Criminal Justice Reform group, please contact Kate Thomas (creativekate@gmail.com) or Dave Martinsen (davidmartinsen@yahoo.com) for more information.